Have you ever said, when I get this, (or that, or the other) I’ll be happy?

Fair enough, its good to have an aim, know what you are going for, a target. Somewhere I read something about concentrating on where you are going, don’t stress on the how to get there every step of the way. Good advice.

I don’t really like buts, but there is a big but here… BUT what about now?

I hear that from my kids, sometimes sounding so tired, but they live in a competitive world, both in fast cities ( London and Paris) and feel they have to keep going and going or they will lose momentum….

Who’s that song by ‘Ill sleep when I’m dead”? Good song but not a motto to live by.

Without relaxation you will not have any energy, we need sleep and stillness to facilitate activity – mental and physical.

Without food you will not have any energy; your metabolism will drop, your cells will diminish, your health will suffer.

Without enjoyment your motivation will sink.

More on each of those coming up.

Give yourself a break!!!

For today, lets enjoy today. Even if you are working towards your aim, have today as a happy day, find something good in it, funny, profound. Smile at all the people you see, it’s infectious, really! Someone might think you are nuts and ignore you but I bet someone else gives you a twinkly smile back, and it feels good! I just thought I would repost this after having a really low energy feeling yesterday afternoon.

I was kind of sinking into it (it can be so easy just to go with it, let it take your hand and follow it … down…) and forced myself to get on my mini trampoline and do some bouncing, 10 minutes later the mood was definitely more positive and after another ten, hey presto, energy restored, mood lifted.

It’s not always so simple, but it does really help to DO something when that shadow starts closing in.

Back in rainy Britain, what is going on? We left  the 30+° heat of France and arrived in the UK at 6.30am to 20° which was very hopeful but today it is pouring and grey. Kinda cosy though, sometimes don’t you just need cosy?

I have a meeting today that I am not looking forward to. I was thinking about what to wear and thought “OK, what would I wear that would make me feel better?”… no the answer wasn’t a power suit or even a mask, it was PJs and thick socks!

I had to have a tooth out at the dentist a while ago, I was terrified, I have never been good at dentists. I took along my thick super soft socks. He looked at me as though I was nuts when I started to take my shoes off, I explained the comfort theory and he got it – really we need to do whatever gets us through (within reason obviously;-).

I think we spend far too little time really thinking ‘what would make this work’ instead of ‘this isn’t working’. Because I am nervous we started the day today with a really brisk walk, in the pouring rain, up over the hills. 45 minutes later we were back, soaked but feeling much better about everything and had the exciting surprise that my new samples had turned up and are gorgeous!

Endorphines, laughing at being soaked, concentrating on balancing on stones rather than sinking in the mud, its all going to make you feel better. A fantastic help for people suffering anxiety, depression, grief, fear, almost any mind problem can be given some help/respite by getting outside and moving and being slightly challenged – even if it is by cow pats and mud!

Oh (back to real time) the other thing I just remembered I did was power jet spray some old floor boards, with the idea of using them around the house for window sills, maybe a table (that I couldn’t put anything on as they are very wonky), etc. I did this in the pouring rain and got thoroughly soaked, it felt great, free, silly – probably helped that the weather was quite warm despite raining ALL day, heavily.

So, a bit like the post above, maybe a good play in the rain washes the dark feelings away, just like going for a breezy walk blows the cobwebs away.

OK so its not your usual combination, its not tripe n onions (yucky) or anything edible, but it is brilliant.

I have a really bad reaction to strong paints, to lots of chemicals really – I am sure most of us do but we get used to it, which is not good. Anyway, even having used ‘good’ paint the woodwork paints still smell strongly to me.

Onions are a treasure, did you know that if you put a cut one in a room with someone who has a bad cold/ flu/ bug, the onion absorbs the germs so you have less chance of being the next one with your nose in a hankie? Also if you put one next to your bed with the above, the duration of the illness will be reduced? Apparently so.

So, as you may know, we  (with a little help) are working madly to finish off the renovations to our house to open our healthful, restful, rawful retreat. It’s been a long job but we are really getting there now.

The first day of painting I suddenly had that burning sensation (which I had forgotten about, it was a bit of a shock) and I rushed to put cut onions out …. hopefully.

I went out and when I returned, quelle surprise!, the smell had dramatically reduced and no burning sensation in my wind pipe!

So today with 6 doors  and a long corridor painted I have onions in each door way and carefully placed up the stairs. We are back in France and we seem

We are back in France and we seem to have brought the sun with us ( though where we picked it up I am not sure!).

We are here for three months, home sweet home, which is lovely. Lots to do of course but all very exciting. Contracts almost signed for the birth of Tatty Tot, more on that later but marketing and product ideas are coming thick and fast!

Its like making a new person with its own personality – I shall share Tatty Tots personality soon, I just need to get used to it myself a bit first. Its all there but I want to know it and understand it before I share too much, for now its mine, soon I will give it its willful head!

As we were driving back I mentioned that because we are back for ages we could actually grow some things in the garden again for the summer – tomatoes for instance. We agreed we would which was probably more difficult for Robin than me as he knows he will end up doing all the hard work. We used to have the garden bursting with fruit and vegetables and were amazed every day with what we eat from it but now we are back and forth we are not there to water it, never mind eat the produce. We really miss it.

People can be so thoughtful sadly that does not include the very noisy family who took command of the “quiet room” on the Brittany Ferries boat we traveled on and proceeded to keep everyone awake (most who had long onward journeys and needed a bit of shut eye) because – I heard said noisy Mum say in the loo – they wanted to keep the kids awake on the boat so that they had would sleep in the car and give them some peace. It didn’t help that ‘the Dad’ found it very funny that the sleeping people woke up and left the room.  Rant over.

As we pulled into the garden after a very long day the first thing we saw were two rows of tomatoes, perfectly planted (I think there was a point being made as anything we do is usually decidedly higglety pigglety), our lovely neighbours had realised the same thing we did and planted them for us, what a welcome!

Thanks neighbours, you restored our flagging faith. 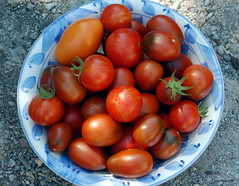