Charlie Brown: “Some day we all will die” Snoopy: “True, but on other days we will not “

Charlie Brown; “Some day we all will die”

Snoopy; “True, but on other days we will not ”

Let’s make the best of our days, our loves and our lives.

Some day we die, the other days we don’t and those days we need to enjoy the living not worrying about dying.

If you are struggling with that reach out to somebody, don’t suffer alone. We’ve just been for a blustery walk around a loch and up a very steep and rugged hill, picked some blackberries and one very lonesome bilberry and a twig of pine to make tea from. Blown away the cobwebs, boosted our endorphins and foraged some Vitamin C and antioxidants… Robins now chomping his way through some Scottish fudge. So, I passed both my courses!

It was so intense, why did I do two at once?

Next time (have I said that before?) I will listen when told “they are both intense and it is best to do one at a time”…

Anyway, despite getting really stressed half way into the photography course and only a week into the raw chef course, I really did love it and I learnt so much!

Raw food is healthy. That is a fact. If it is a regime that is used properly and balanced well nutritionally it is very healthy. If it is an addition to another regime, or simply ‘normal’ eating, it adds a very healthy boost.

And, lets face it, it can also be a huge compromise.

Yes, we can make a raw pizza – NO it will never taste like a cooked, melty, gooey cheese fest!
My daughter used to ask “But why pretend? Its not a pizza/ spaghetti/ chocolate mousse/ macaroni cheese/ lasagne!”. And she was right, sort of, but don’t people need something to help them understand what something is going to be like? I think so.

For example, a lasagne says it will be savoury, rich, cheesy with tomatoes and some herbs in layers. Savoury, cheesy with tomatoes and herbs

Chocolate mousse will be chocolately, sweet, smooth. I do believe that most food flavours and favourite recipes can be imitated in a healthy way and I get lots of inspiration from my huge range of recipe books, different traditions and world foods.

And, if you want to convince or convert a non-believer some raw pizza recipes may taste good, even come some way close but that is the dish most likely to fail you!

Other times my kids would ask “It tastes good……what have you hidden in it Mom?” and invariably I had hidden something somewhere like avocado in the mousse, courgette in the hummus etc and they would not have known had they not asked.

Having said that I believe that now, with the input of some amazing chefs worldwide and progress made by people playing and developing and sharing recipes and with the equipment that has been improving them becoming more widely available there is virtually no compromise! No need for pretend! Allelulia!

I have learnt to balance flavours and components and nutritional elements and that the greener and worse it tastes is not better for you – yes, I would do that to me, OK and to Robin, I would make my smoothies very green and glug them down without my halo slipping a millimetre. Then grimace and a shiver would run through me – and him, sorry Robin.

I’ve been uncooking raw food, both simple and more complicated for over 12 years now and mostly the people I share it with have been loving it. It is time more people discovered more about it.

I have just made a divine smoothy which balanced my need to give and receive health and our need for it to taste delicious. He is very happy. Me too, though I don’t feel quite as sanctimonious as I used to!

Here is the recipe. I am using cups because in using the American measure I’ve found it is easier to work with. Use a standardised ‘cup’ measure (they are really easy to get hold of now) or simply a tea cup it doesn’t matter as long as you use the same one throughout the recipe really, I’m thinking a standard English tea cup to balance with the other quantities in this recipe.

Blend and share between two (or one now, one later 🙂 and ENJOY it!

Ok quick recipe for an easy, delicious and nourishing dip – yes and low calories, cuts through cravings for creamy, cheesy and savoury and more I’m sure!

Anything you do that increases your intake of fruit and veggies, especially green, is a good thing, especially when it tastes this good! 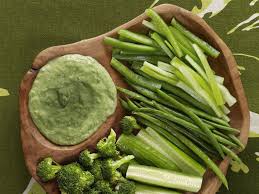